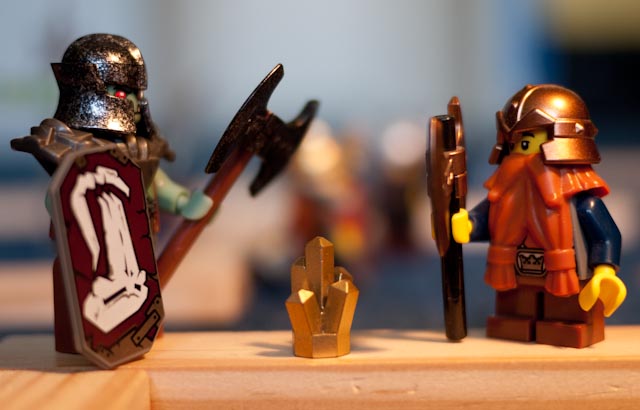 My kids were bored on one of these unkind-weathery Sundays so we decided to invent a new war game. Creating the game from scratch took us most of the afternoon and we had to modify rules several times to make it balanced. This is what we ended up with.

We picked a bunch of Lego characters, dwarves and orcs. I stumbled upon these in a toy store one day and got them for pretty much nothing, thinking they might be fun for the boys. Six dwarves will be fighting 12 orcs. 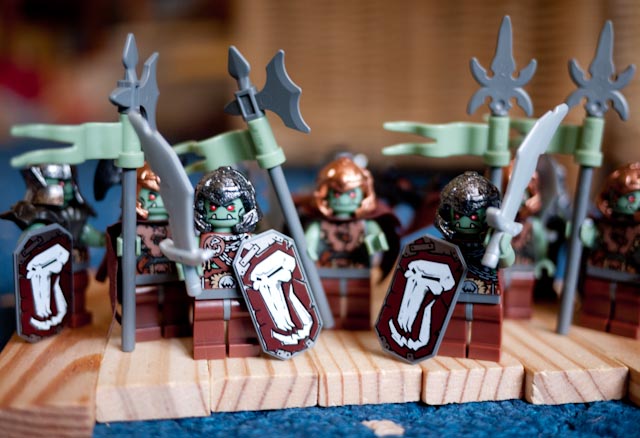 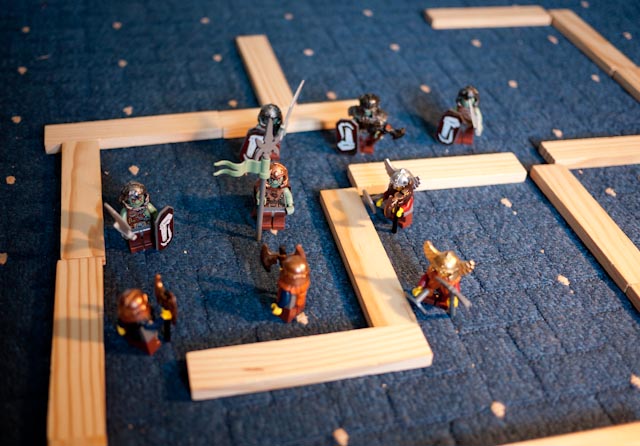 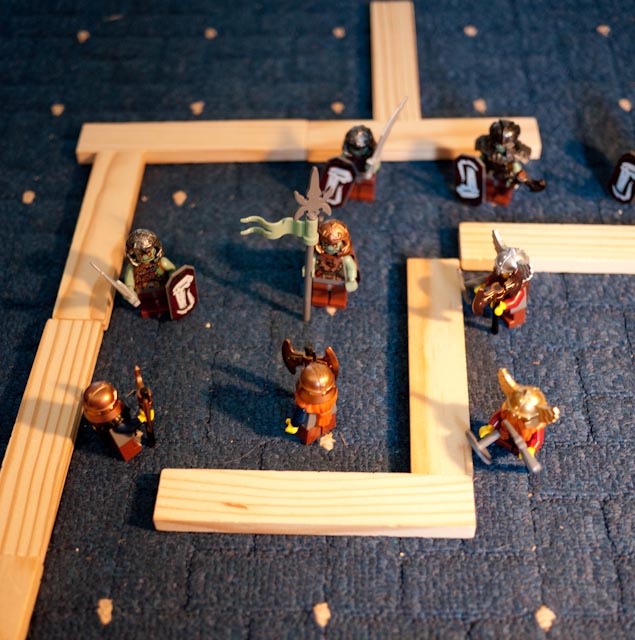 For the board itself we used our carpet: a blue background with yellow dots organized along an orthogonal grid, perfect to align pieces. Walls are delimited with Kapla pieces because they happen to have the correct length to align with the carpet dots, but we could have used books, rulers, or larger pieces of Lego.

We created a maze with the wooden blocks, with long narrow corridors, wide rooms, choke points and two entrances. This was a lot more difficult than initially expected as paths need to be created to avoid making an obvious, shorter route to treasures.

Time to make up rules: the dwarves ought to be much stronger than the orcs because they are the good guys. So the orcs should be in infinite numbers to compensate, which pushes for a mission-based game where the six dwarves have a goal to achieve and countless orcs are trying to prevent them. We distributed three gold gems on the board: the dwarves have to pick them up and bring them all back to their entrance to win the game.

Each player plays in turn. We have an orthogonal grid so movements should be in all directions but diagonals. Dwarves can use up to 6 movement points each turn, orcs can use up to 8. Once a player has moved all his pieces he can attack.

Orcs have 1 attack, 1 defense, and 1 hit point. Once an orc has been hit it is dead and removed from the game.

Dwarves have each 2 attack, 2 defense and 2 hit points. The first time a dwarf is hit it looses its helmet or shield and reduces to 1 attack, 1
defense and 1 hit point. Dwarves are killed on the second sucessful attack.
Attacks are solved using this table:

Att-Def is the total attack points minus the defense points for the attacked piece, the leftmost column is the result of a tossed six-sided dice.

Each piece may only attack once during its turn.

Several pieces may attack the same one, cumulating their attack points. The player who receives hit points decides how to distribute them to his pieces.

Building the game turned out to be much more fun than actually playing it. The first few games had to be re-balanced with everybody contibuting new rules and the final result is quite simple and satisfactory.

Beyond Orcs and Dwarves

Starting from there we created more Lego-based games around the same set of rules: Jedi knights against stormtroopers and clones, with special rules for heroes, long-range weapons, line of sight and buildings. The same rules were then extended for space battles: ships have several weapons, shields, and hit points corresponding to various parts of their hulls.

Opening the game to three players was a bit more difficult: if the three have equal power two of them will unite against the third, who will be immediately overwhelmed. The poor third player has then the privilege of choosing who of the remaining two will win, by concentrating attacks on one of the two players before he gets eliminated from the board. Our best bet was to spread power as 2 vs 1+1: one player has as much power as the other two combined, which brings the game back to a classic 1vs1.

And then Spring started showing up and it was much more fun to go rollerskating around the neighbourhood with friends. Can't say we miss stormy Sundays though.