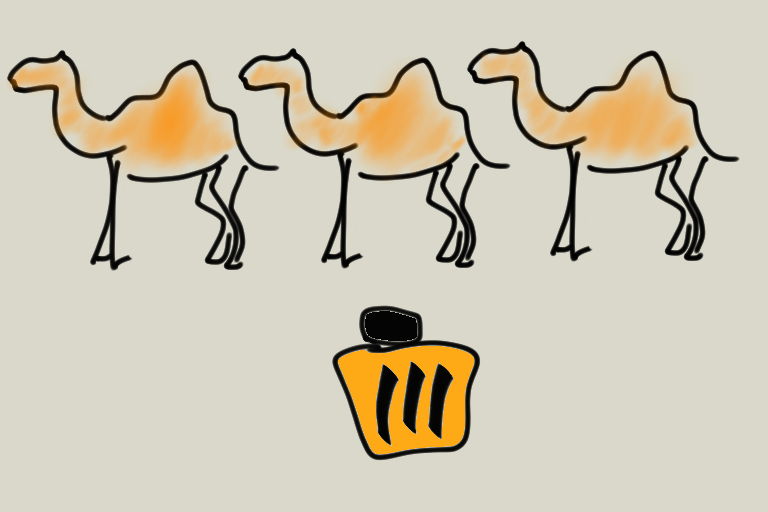 I read somewhere in a math history book that numbers were actually invented to count camels. Someone wanted to send over a herd of camels to be sold on a market on the other side of the desert and they did not trust the camel escort. How would the receiving party know if some camels had not been stolen on the way? So they used a fairly simple principle: line up your camels, put one pebble in front of each. Gather the pebbles, put them in a small jar, burn the cork, hand it over to the escort.

On the receiving end, break the jar, put one pebble in front of each camel. You will know immediately if camels are missing.

This apparenly went on for a while, until someone figured out that instead of lining up pebbles and camels you could shorten the process by writing signs on the jar to indicate how many pebbles were inside. On the receiving end you just had to look at the signs and compare to what you saw. In case of doubt, break the jar and line up pebbles and camels. And then it was just a matter of time until somebody noticed you don't need the pebbles and the jar. Just cook a clay tablet in an oven with a text indicating how many camels you are sending.

I have no idea if this story is true or not, but I like the way it stresses the breakthroughs that have happened. Going from a bijection pebbles/camels to a bijection in camels/signs was brilliant. I expect the first attempts were likely to just draw plain strokes on the jar, as many as there were camels in the herd. The next breakthrough was simplifying a whole bunch of strokes into a single sign, e.g. using a hand to signify the number 5. And the last one was to realize that the jar and pebbles were unneeded.

Another shift that amazes me to this day is how money actually works. The first currency tokens had actual value, they were made of metal you could melt and use if you so wanted. When the first bank notes were introduced, they switched from actual value to a potential: the note said that you could obtain real metal if you were to exchange that note in a bank.

We now live in a world where I can pay my lunch by waving a piece of plastic over a radio-equipped terminal connected to a bank. My plastic contains numbers that cannot be found on any other credit card, which are used to authenticate me. Now my bank makes a promise to pay my meal to the restaurant's bank. No metal or paper changes hands.

Since a few years, things are shifting again. Instead of waving a credit card containing my unique account identification numbers, I can now use a mobile phone that contains a series of numbers that are only valid for myself, my account, for today, and for limited amounts. This is what they call tokenization and the reason it is booming is that it is a lot simpler to store temporary tokens with limited value than long-term banking credentials with unlimited powers. Security needs not be that high, though you still need to be able to authenticate account owners in a very secure way, but there are plenty of ways to achieve that.

Among the strongest methods we know today to authenticate someone, the most popular relies on the fact that you cannot split a big number into a multiplication of primes. If you tried with a gigantic computer, it would require more heat to power than is available in the universe.

We have come a long way since camel-counting.